Deprecated: Array and string offset access syntax with curly braces is deprecated in /home/inthedri/public_html/wp-content/plugins/widget-category-cloud/category-cloud.php on line 166
 Here's why you should back into perpendicular parking spaces | Ozzie

This came up on Facebook once. The question was rhetorical, I think. It was something along the likes of “People who back into parking spaces: Why?” I don’t think this friend expected genuine answers, but genuine answers there were. When all was said and done, I don’t know if this person ever adopted the backing-in method, but they clearly understood and empathized with those of us who practice it more often than not. There are great reasons that backing in is a better practice.

The implication is that you have to wait for the person to make such a maneuver. I suspect if you’re in a hurry to park, it could be frustrating, especially if the driver didn’t give enough indication of their intentions.

I haven’t looked at studies of this phenomenon, and I’m not sure they exist. But, anecdotally, here’s my experience, along with reasons I think that in the vast majority of situations, it is for both the individual and the greater good to back into a perpendicular parking space.

Parking can be just about as quick when backing in. Having the wheels that steer in back makes it easier to angle in sharply in reverse, reducing or eliminating the need to back out and straighten up.

Leaving the parking space is much quicker as you save another multi-part turn. More than likely, you’re making up more time on your exit than you sacrificed backing in. That saves everyone around you time, too. This is especially true for event parking when everyone is leaving at once.

It’s safer for you and yours. Backing out of a perpendicular parking spot in a tight parking structure meant I was putting my child (or anyone in the back seat) in harm’s way before I could even assess the situation. The proliferation of rearview cameras has helped. Rear cross-traffic alerts and automatic rear braking help even more, but we shouldn’t put ourselves in positions where we totally rely on this tech or, even worse, rely on others to see or anticipate you backing out.

It’s safer for everyone around you, too. You can actually see that person walking by on the way to their own car, and you can see that vehicle waiting for someone else back out. 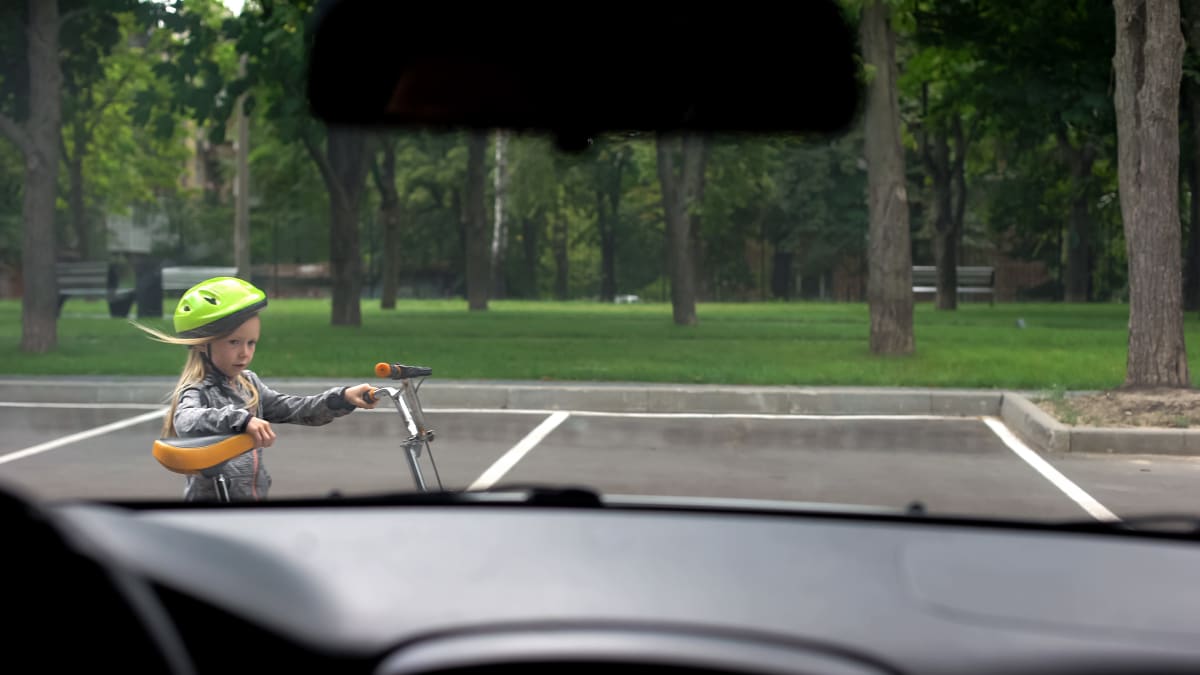 It can save dings or scrapes. Whatever car I’m driving is more likely to have a rearview camera than to have one up front. With that camera, I can ensure I’m not going to scrape a splitter on a curb or tap a signpost or another car with my bumper. If I’m pulling in forward, I often leave myself enough distance to know my front end isn’t going to get mangled by its surroundings, which can leave my rear end sticking out where it’s more likely to get hit. Backing in and using the camera, I can close that gap as much as I want, tucking my car into its parking spot as deeply as possible. But hey, you don’t have to take my word for it.

What if someone encroaches too close so you can’t reverse? Well, what do you do when you parallel park on a street? You had your turn signal on (please tell me you had your turn signal on) to indicate where you planned on parking. They should have paid attention, and the onus is on them to figure it out. They get to decide whether to back up to give you the room back (assuming they can), or go around you.

Of course, there are times when it doesn’t make sense to back in. Maybe you need the extra space to load up the rear cargo area. With some electric vehicles, like the Nissan Leaf, it sometimes makes more sense to park nose-in for easier charger access. And obviously, if a sign or parking attendant instructs you to park nose-in, you should listen, even if it’s a dumb rule … James.

So have at it. Just like I’ll leave you room to merge at an actual merge point, I’ll gladly wait for you to back into your parking space so I don’t have to wait for you to blindly back out of it later. This is the way.

Rant Of The Day: Learn How To Park, Please

A Refresher in Driving Etiquette Just for You!